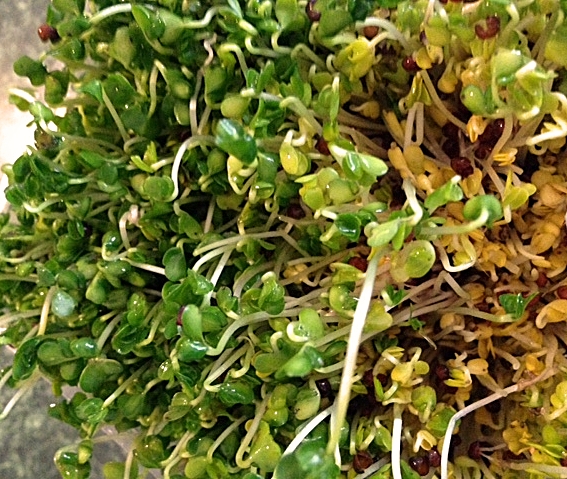 We have both been a bit obsessed about sprouted foods lately so thought it would make for a great weekly topic. But let’s start with the basics first . . .
What exactly ARE sprouts?
Sprouting is the practice of germinating seeds, which can then be eaten raw or cooked. Though many may conjure up images of alfalfa sprouts, you can actually sprout almost ANY seed, including grains, vegetables, and beans/lentils.
Our love of sprouted plant foods goes way beyond taste and texture. There are numerous documented health benefits that will knock your socks off. Here are just a few:
1. Enzymes: Experts estimate that there can be up to 100 times more enzymes in sprouts than unsprouted foods.
2. Protein: The quality of the protein in the beans, nuts, seeds, or grains improves when it is sprouted.  Proteins change during the soaking and sprouting process, improving its nutritional value.
3. Fiber: The fiber content of the beans, nuts, seeds, or grains increases substantially.
4. Vitamins: Vitamin content increases by up to 20 times the original value. For instance, research shows that during the sprouting process bean sprouts increase in vitamin B1 by up to 285 percent, vitamin B2 by up to 515 percent, and niacin by up to 256 percent.
5. Minerals: During sprouting, minerals bind to protein in the seed, grain, nut, or bean, making them more usable in the body.  This includes calcium, magnesium, and others than help us to balance our body chemistry for weight loss and better health.
6. Energy: The energy contained in the seed, grain, nut, or legume is ignited through soaking and sprouting. This means more energy for YOU to get through your day.
7. Alkalizing: Sprouts are alkalizing to your body.  Many illnesses including cancer have been linked to excess acidity in the body.
8. Digestion: One of our favorite benefits is that sprouted foods are much easier to digest than their un-sprouted counterparts. That’s because the sprouting process begins to break the food down for you. This is a HUGE bonus to those who struggle with any digestive issues such as gas, bloating, reflux, constipation, etc.
9. Affordable: Sprouts are inexpensive. Oooh la la – and a fabulous way to improve your health without expanding your budget.
There has also been some tremendous research on the anti-cancer benefits of broccoli sprouts. They contain a substance called sulforaphane, which is the number one cancer-fighting phytochemical with fabulous research behind it. Though found in all cruciferous vegetables, even a small amount of Broccoli sprouts have up to 20x the amount of sulforaphane than much larger amounts of whole broccoli. That’s pretty impressive.
Want some ideas for how to include sprouted foods in your diet? It’s easier (and more delicious) than you could imagine. They can be found at most supermarkets and all health foods stores. Sprouts come in all shapes and sizes. Add some Leafy Sprouts or Bean Sprouts – or even Grain Sprouts to a salad of garden vegetables – OR better yet – use nothing but sprouts and toss with a little oil and vinegar or your favorite dressing.
Here are a few more ideas:

We also LOVE a company called TruRoots, who sell packaged beans and grains which have been dried to prolong shelf life, and therefor require shorter cooking time than other grains (this means they cook up FAST, in like 15-20 minutes). Think of them as your upgraded Uncle Bens! Check out their website for all their amazing products. They have a fabulous recipe section as well.

Here is a delicious recipe that combines a sprouted (dried) grain which requires short cooking time mixed with raw sprouted beans (can be eaten without cooking). Let us know . . . do you eat sprouts? What is your favorite kind? Share the love.

This site uses Akismet to reduce spam. Learn how your comment data is processed.