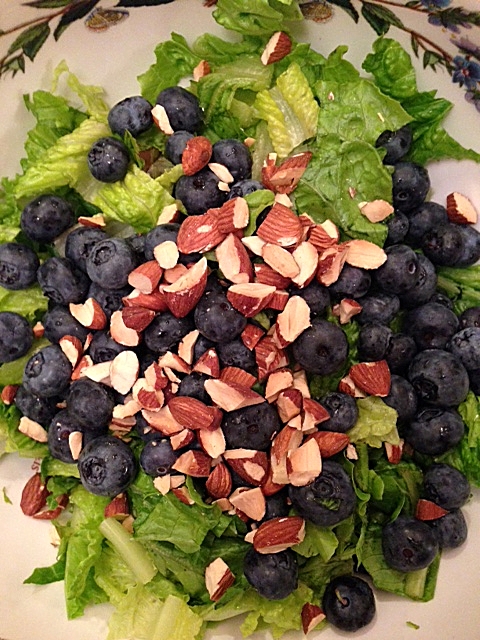 This week we wanted to share an extremely simple yet delicious salad that not only appeals to grown ups but is always a HUGE hit in our ‘Kids Can Cook’ classes. We made this last week in our most recent class and the kids, ages 6-10 (and their parents) demolished the entire bowl and there was not a morsel left.

So for those of you who have picky salad eaters, this one is a must-try. It’s also a great way to use up your seasonal blueberries which can now be found locally and are readily available everywhere.

Before we share the recipe we wanted to give a quick shout-out to the amazing benefits of blueberries, which are on almost everyone’s “superfood” list. That’s because, in addition to containing their fair share of fiber, vitamin C and vitamin K, they are bursting with powerful antioxidants. In fact, they have one of the highest rankings on something known as ORAC (oxygen radical absorbance capacity), which measures the antioxidant capacity of foods and was developed by the National Institute on Aging in conjunction with the National Institutes of Health.

They also contain a compound known as gallic acid, thought to be one of the most powerful antioxidants of the bunch. In addition to blueberries, gallic acid is also found in walnuts, apples, flax seed. Ahhh – just a few more of our favorite whole foods!

In a nutshell, blueberries can benefit you in SO many amazing ways:

This site uses Akismet to reduce spam. Learn how your comment data is processed.